The testing of the architecture of neural network calculation accelerator IVA TPU was performed on the international MLPerf site. This architecture was developed by IVA Technologies. The successful certification of the product will allow to increase the degree of confidence to the developer, particularly from the international commercial and research communities, and will provide it with a worthy place among the international giants in the microelectronics market in the field of artificial intelligence support.

The results of testing of IVA TPU architecture, implemented in FPGA, were confirmed and published on the official page of MLPerf site (https://mlperf.org/inference-results/) in the sections of inference on terminal devices Edge, Closed Division (ID 0.7-156) and Edge, Open Division (ID 0.7-396). MLPerf is an international site for certifications and testing of equipment in the field of machine learning and artificial intelligence. The solution was qualified to the most complex group of Closed Division – a closed list of networks with restrictions on modifications, waiting time, and accuracy.

«This event is without exaggeration unique for modern Russia. It is difficult to recall other times when domestic development in microelectronics received a certificate of maturity of hardware and software components from foreign experts», – said Evgeny Terentyev, Deputy Director of IVA Technologies. – «We have shown that a relatively small commercial young company, with a well-designed development strategy and work processes, is able to realize the potential of its team and create a successful product in microprocessors, one of the most complex areas of microelectronics».

Edge AI is the fastest growing segment on the market, and there are only 5 vendors in Closed Division Edge group: Nvidia, ARM, Centaur, Xilinx and, starting from September 2020, IVA Technologies. 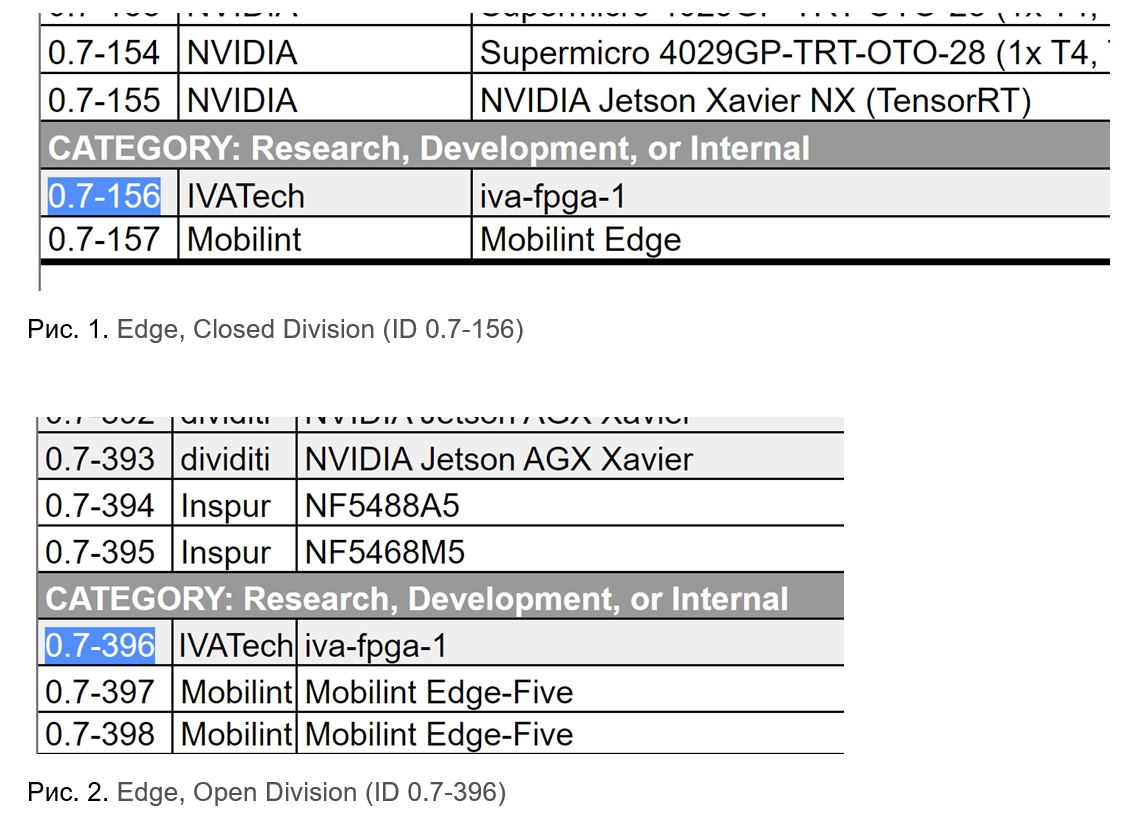 The analysis of the results shows that for one of the most widespread neural networks (Resnet-50), the IVA TPU architecture provides a delay of 3 times less than the best solution from Xilinx. It is planned that when implementing an accelerator with the IVA TPU architecture in ASIC (expected in the first quarter of 2021), the results will be better than these from our closest competitor NVIDIA Jetson Xavier NX, despite the lag in technology (28 nm vs. 12 nm).

«This was a serious test and assessment of the level of maturity of hardware and software stacks of the IVA TPU architecture, which our team successfully passed, confirming their high professionalism. Russian development has taken its rightful place among international giants in the field of microelectronics for artificial intelligence support,» – Evgeny Terentyev added.

In the near future, two microprocessor configurations based on the IVA TPU IP-core will be launched in production: one for the end devices (IVA E) and the other for the cloud services (IVA H). Implementations of several modules are being developed on the basis of these microprocessors, which will be directly used in customers' electronic devices.

Thus, IVA Technologies will be able to form a wide product line that will meet the needs for computing resources for accelerated calculation of neural networks, for completely different production and service companies. We are talking about manufacturers of smart devices (smart cameras, IoT, industrial and urban security), developers of Autonomous machines (ADAS, drones), large service operators and data centers (photo and video data processing, text and voice processing, information security). In addition, the company plans to start selling computing resources for neural network inference via a cloud service.